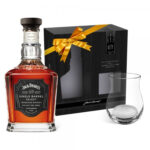 *For item protection, the bottle will be shipped accordingly*